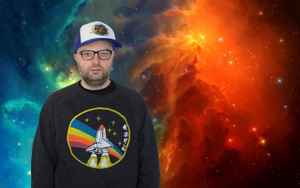 Real Name:
Adam Cresswell
Profile:
Hailing from Catford in South London, Rodney Cromwell is the solo project of Adam Cresswell, founding member of indie-folktronica band Saloon (who had four entries in John Peel’s Festive 50 & three Peel Sessions) and one half of electronic two-piece Arthur & Martha (acclaimed by the likes of NME, The Guardian and Artrocker). On the solo LP, singer Alice Hubley from Arthur and Martha also features on the duet 'You Will Struggle' and the single 'Black Dog'.

Centred around the use of vintage synthesizers and old drum machines the lo-fi aesthetic of Arthur and Martha is still very much in evidence on the debut album ‘Age Of Anxiety’. Lyrically the LP explores themes such as juvenescent paranoia, romantic despair, love, loss, panic and depression yet while retaining an upbeat pop sensibility.

At the end of 2015 'Age of Anxiety' featured in numerous end of year charts the album was pronounced 'Synthpop Album of the year' by The Record Stache. Rodney Cromwell was named most promising act of 2015 by The Electricity Club. The track 'Barry Was An Arms Dealer' was voted into the Official Festive 50 as compiled by Dandelion Radio.
Sites:
happyrobots.co.uk, electricityclub.co.uk, Bandcamp, Twitter
Members:
Adam Cresswell