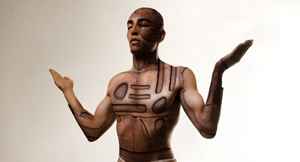 Real Name:
Malcolm Dakeyo
Profile:
Kelton Prima is a parisian dj and producer who starts making music in the late 80’s as a member of a computer demo band called Future Minds, using only an Atari ST and later a Commodore Amiga. In the early 90’s, highly inspired with house and techno played in underground rave parties he starts spinning records in clubs and parties throughout france, produces his own tracks and performs his first hardcore/breakbeat live in Gibus club at a Mental Confusion party. In 1998 he gets professionally involved in music distribution and retail in Toulouse where he meets Pilooski with whom he collaborates few years later within Inkorporation collective. At the same time they run Ind.rec label indrec releasing eclectic stuff from soul to electronica. He also produces under D_Tekt moniker and writes some articles and reviews for musical press. Also he worked on video, multimedia installations or musical performances with various contemporary artists such as the French photographer Lionel Bayol-Themines or the E/I collective. From there he goes back to his first passion: disco and electro-funk, he produces then The Arrival EP on belgian label Disco Praline, EP’s and LP for Jamal Moss’ Chicago based imprint Mathematics Recordings, various digital and 12" releases on Pizzico Nobel and remixes for Hard Ton, Thieves Like Us and Plastique de Rêve among others.
Sites:
Facebook, SoundCloud, mixcloud.com
Aliases:
D_tekt, Malcolm, Malcolm D, Malcolm Dakeyo, Skyline from Future Minds