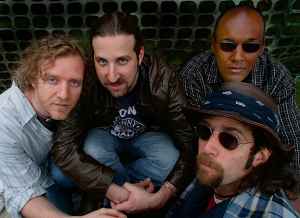 Profile:
Formed in 1988 in New York City, in 1990 the Spin Doctors were signed to Epic Records/Sony Music. The band's debut EP "Up For Grabs" was released January 1991.
The band's debut album "Pocket Full Of Kryptonite" sold poorly until MTV and radio began playing the monster hits "Two Princes" and "Little Miss Can't Be Wrong", which resulted in the album being sold in over ten million copies.
Their 1994 follow-up "Turn It Upside Down" was not as successful as "Pocket Full Of Kryptonite", though it did sell two million copies. Shortly after the release of Turn It Upside Down, guitarist Eric Schenkman left the band, citing musical and personal differences. He was replaced by Anthony Krizan.
The 1996 follow-up, "You've Got To Believe In Something" sold poorly, which resulted in guitarist Krizan leaving the band. He was replaced by Eran Tabid. Also during this time, Ivan Neville joined the band on keyboards.
1998, the band signed to Uptown/Universal and released "Here Comes The Bride" in 1999. During the recording of "Here Comes The Bride", Mark White left the band. The bass tracks on the album were finished by original band member Aaron Comess.
The Spin Doctors remained stagnant until 2001, when the closing of the famous New York City club Wetlands brought the original four members back together. The band started playing one-offs and eventually recorded an album, "Nice Talking To Me", released September 2005.
Sites:
spindoctors.com, MySpace, Wikipedia
Members:
Aaron Comess, Anthony Krizan, Chris Barron, Eran Tabib, Eric Schenkman, Ivan Neville, Mark White (2)
Variations:
Viewing All | Spin Doctors
Spin Doctor, The Spin Doctors