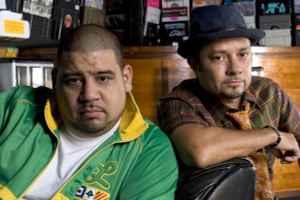 Profile:
Masters At Work is the house/garage production and remix team of "Little" Louie Vega and Kenny "Dope" Gonzalez. They first worked together using the name, which had been given to them by mutual friend, Todd Terry (who recorded several tracks under that name in the 1980s), in 1990. Cousin to Eric Vega, popular event creator and promoter in New York City.
The duo has also produced music together under the names MAW, KenLou, Sole Fusion, and Nuyorican Soul.

Their Nuyorican Soul project had the duo working extensively with real (as opposed to sampled or synthesized) musicians, in a variety of styles including Latin, disco, jazz, and more. Musicians who took part in this project include Vincent Montana Jr., Roy Ayers, George Benson, Jocelyn Brown, Tito Puente, and members of the Salsoul Orchestra. The self-titled album released under the name Nuyorican Soul in 1996 included original tracks as well as cover versions of songs by the performers with which the duo was working, such as "Sweet Tears" (Roy Ayers), and "Runaway," originally sung by Loleatta Holloway with the Salsoul Orchestra, here sung by India and featuring musicians from the original recording of 1977.

June 12, 2022
Years will come, years will go, but the work these two have put out will remain. Listen to everything they've touched & study it.
Eternally grateful <3
Reply Notify me Helpful

April 12, 2022
With an almost impossible collection under numerous aliases that can never be completed in one's vinyl collection, Masters At Work are the best ever on earth! Nuff said! The epitome of quality house that goes unrivaled, untouched and underrated as f*ck! If you ever get the chance to see these guys live, just go for it and make the most of it. Guys like these won't be around forever! Catch them till you breathe your last! ;)
They are the best! They are magnificent! They are glorious!
Reply Notify me Helpful

September 21, 2019
Oh thanks god for these two! Absolute legends. Thats why i love House music more than other genres.
Reply Notify me 5 Helpful

June 20, 2011
It was like the air went out of the balloon when MAW stopped releasing tracks. I wish these two fellas could get back and do a few tracks again for old times sake because i miss those times.
Reply  See 1 reply Notify me 4 Helpful

April 9, 2003
Kenny Dope and Lil' Louis Vega make MAW, Masters At Work, and what masters they are. They seem to bring any song to life with their remixes, and make great uplifting dance music with latin and jazz elements. They are masters on the decks too, they know how to liven up a party and their sets are spot on, and the mixing is superb. I can't really say a wrong word about them, great artists with obvious talent.
Reply Notify me 4 Helpful