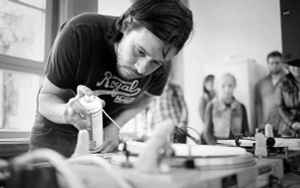 Real Name:
Benjamin Gwilliam
Profile:
Ben Gwilliam is an artist whose work spans sound, film, installation & performance. His work explores how the mechanics of sound medias’ reflect the ways in which we listen to and look upon the world around us. His fascination with making sound drives a curiosity that forms as durational performances and Installations, film & video works and writing.