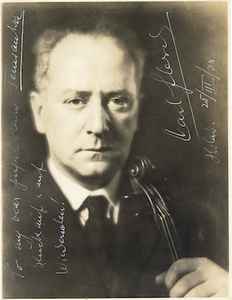 Flesch was born in Moson (now Mosonmagyaróvár), a small town in northwestern Hungary, nearby the Austrian and Slovakian borders. He began playing violin at the age of 6-7yrs, continuing his formal training at Vienna Conservatory (1886–'89) under Jakob Grün, and subsequently with Eugène Sauzay and Martin Pierre Marsick at Conservatoire de Paris (1890–'94). Even though academia soon became Flesch's main focus, Carl continued to perform extensively, both as a solo recitalist and in various ensemble settings, for over 48 years. He toured solo all across Europe, as well as abroad—in Russia (1908) and the United States in 1914, where Flesch made a few "diamond disc" recordings for Edison Records. Some highlights of his on-stage career included playing in Schnabel Trio, which gained prominence in the 1920s as one of the leading European chamber ensembles, with pianist Artur Schnabel and cellist Jean Gérardy (later Hugo Becker).

From 1897 till 1902, Carl Flesch served as a violin professor at Conservatorul de Muzică in Bucharest—his first academic position—appointed as a court musician by Queen Elisabeth of Romania during his stay. Flesch taught as a professor at Jan Pieterszoon Sweelinck's Conservatory (from 1903 until 1908) in Amsterdam; next, his family moved to Berlin. In 1924, Carl Flesch relocated to North America, joining a newly-established Curtis Institute Of Music in Philadelphia as head of the violin studies. During his tenure at Curtis, Flesch played 1st violin in the Curtis Quartet, co-founded with fellow faculty members Emanuel Zetlin (2nd violin), Louis Bailly (viola), and Felix Salmond (cello). In Summer 1926, during one of the Flesch's family typical vacations in Germany, he bought a villa in Baden-Baden.

As the Nazi regime rose to power, German authorities condemned Carl Flesch as a Jew, and Berlin Conservatory fired him in Sept 1934. One of Carl's closest friends in Germany, the nation's leading conductor Wilhelm Furtwängler, repeatedly wrote to Adolf Hitler to revert this decision. Maestro called to "make an exception [to law] in this difficult case," as expelling Flesch would further increase Germany's already catastrophic cultural isolation. Despite this, in June 1935, the Third Reich further revoked the Flesch family's German citizenships—forcing them to fly from Baden-Baden to London. In 1939, Carl made some concert arrangements in the Netherlands, so the couple settled in The Hague.

In May 1940, when Nazi troops occupied Dutch territory, Carl Flesch unsuccessfully tried to return to the USA but couldn't get visas. He lost Hungarian citizenship in 1942, and Gestapo arrested Flesch and his wife several times; he had to wear the yellow badge now, banned from performing or teaching anywhere. Since Furtwängler never gave up on his friend and kept bombarding Hitler's apparatus with letters, Flesch got released from prison. Simultaneously, Géza de Kresz and Ernst von Dohnányi pressured Hungarian authorities to reinstate Flesch's passport, so in Dec 1942, Carl and his wife returned to Budapest.

Flesch spent the rest of his life in Switzerland, leading master classes at Lucerne Conservatory on Ernest Ansermet's invitation, and passed away at 71.

Carl Flesch International Violin Competition (1945–1992, London)
Initially organized by the artist's son Carl F. Flesch and one of his former students, Max Rostal, this bi-annual concourse became part of the City of London Festival since 1968. At its peak, 'Carl Flesch Medal' was among the most desirable and prestigious prizes for young violinists (and later, viola players) in the world.

Károly Flesch International Violin Competition (1985–2018, Mosonmagyaróvár)
Titled "Flesch Károly Nemzetközi Hegedűverseny" in Hungarian, this bi-annual event took place in Flesch's hometown (where his remnants are, in the family grave). It began as a "stepping stone" for aspiring Hungarian violinists, where they could've prepared for the prestigious London concourse. Since 1993, however, Károly Flesch Competition became international and essentially replaced the "main" event.

Instruments
Carl Flesch played and owned at least a dozen antique violins over his career, most notably: