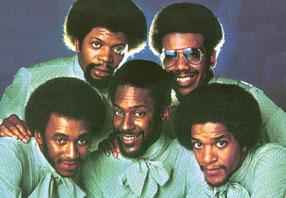 Profile:
Soul vocal quintet, formed in 1966, Detroit, Michigan, U.S.
Initially managed by Dick Scott (3), they got to know their producer Michael Stokes. After 1980, Bobby Green (6) was replaced by Carl Cotton. They released six albums between 1976 - 1983. Their hits include "Gloria", "Sunshine", "It's You That I Need" etc.
Enchantment first joined forces in the late 60s at Detroit's Pershing High School. The group obtained their first recording contract by winning first place in a 1969 talent contest sponsored by local Detroit radio station WCHB. In 1970, Enchantment joined forces with Artists International, a talent development agency for up-and-coming artists (founded by renowned manager Dick Scott). For the next several years, Enchantment began to hone their craft, concentrating on stage presence, choreography etc. by performing in numerous clubs around the city.
Success
By 1976, Enchantment had its first big break by signing with music industry veteran and internationally known pop artist Sid Maurer (the "Daddy of NuPOP Art"), Tash Howard and Fred Frank on their Roadshow Records imprint. Then they released their self-entitled debut album, Enchantment. Two singles from the album would chart very well on the R&B Charts. "Gloria" at number five and "Sunshine" at number three. The self-contained group would enter the studio in the fall of 1977, and recorded their second album, Once Upon A Dream. The album was a gem, far surpassing its predecessor charting on the R&B album charts at eight and Pop Albums charts at 46. It features the crossover ballad "It's You That I Need" which charted at number one on the R&B charts. Unfortunately, while Once Upon A Dream should have thrust the group to A-list status, it would became Enchantment's commercial peak. Journey to the Land Of... Enchantment would be Enchantment's third and final album with Roadshow. Released in 1979, this would be their final album that would chart well on the R&B charts coming in at number 25. But problems with Roadshow's promotion and visibility of the group along with Note Bobby Green was dismissed from the group after the first album.
Decline
By 1980, Roadshow had folded and shut down, Enchantment would sign with RCA Records. Soft Lights, Sweet Music was the band's fourth album. The album was a disappointment with both singles charting at 47 respectively in 1981. Enchantment would sign with Columbia Records in 1982 and would go on to release two more albums; Enchanted Lady (1982) and Utopia (1984). Both albums barley dented the charts. Utopia would be their last album released.
Sites:
soulwalking.co.uk, Wikipedia, whosampled.com
Members:
Bobby Green (6), Carl Cotton, David Banks (8), Ed "Mickey" Clanton, Emanuel Johnson, Joe "Jobie" Thomas