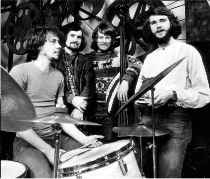 Profile:
Swedish jazz group formed in 1971 by Bengt Berger, Palle Danielsson and Bobo Stenson, but after a short time Lennart Åberg also joined. The band developed a new form of jazz with influences from traditional African folk music, songs from Pakistan and the Balkans, something that was unusual among American jazz musicians. The group was awarded the Jazz Award in Sweden in 1973 and then released their first album. In 1975, Berger left the group and was replaced by Leroy Lowe. In the mid-1980s, Danielsson was replaced by Anders Jormin and Lowe by Anders Kjellberg. In 1989, an album was recorded with Marilyn Mazur. Rena Rama was disbanded around 1993, but an album with recordings from 1987 was released in 1998.
Sites:
Wikipedia
Members:
Anders Jormin, Anders Kjellberg, Bengt Berger, Bobo Stenson, Lennart Åberg, Leroy Lowe, Palle Danielsson