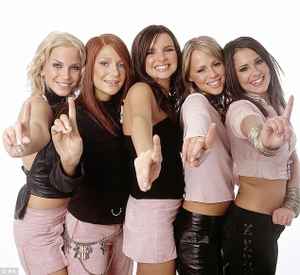 Profile:
Girls Aloud were a British girl group that were created on the ITV1 talent show Popstars: The Rivals in 2002. The group, consisting of Cheryl Cole, Nadine Coyle, Sarah Harding, Nicola Roberts, and Kimberley Walsh, have been successful in achieving a string of 20 consecutive UK Top 10 singles (including four number ones), two UK number one albums, and having been nominated for four BRIT Awards, winning Best Single in 2009 for "The Promise".
In March 2013, just a few hours after having performed their final concert at Echo Arena Liverpool, the five announced and confirmed their breakup on Twitter.

In August 2020 Sarah Harding announced that she had been diagnosed with an aggressive form of breast cancer and that it had now spread to the rest of her body. In early 2021 doctors revealed she would not see another christmas and on the morning of the 5th September 2021 she passed away peacefully.
Sites:
girlsaloud.co.uk, YouTube, music.apple.com, open.spotify.com, music.amazon.co.uk, deezer.com, us.napster.com, allmusic.com, Last.fm, genius.com, musixmatch.com, metrolyrics.com, azlyrics.com, songkick.com, setlist.fm, rateyourmusic.com, officialcharts.com, imdb.com, listal.com, Wikipedia
Members:
Cheryl Tweedy, Kimberley Walsh, Nadine Coyle, Nicola Roberts, Sarah Harding
Variations:
Viewing All | Girls Aloud
Girl Aloud

December 17, 2018
It’s hideous and homophobic that Girls Aloud’s catalogue hasn’t been reissued on vinyl. Talk about the perfect candidates for a box set. Take my money already, ladies.
See 2 replies

November 27, 2007
As far as pop groups go, Girls Aloud do make some good pop records. They can all sing to a degree and they all look the part, it has to be said. The real key to their success is the Xenomania songwriting team - not to dissimilar to The Matrix songwriting collective that made Avril Lavigne a star. The Xenomania tunes have a real edge compared to most pop records. They are full on and do have some very nice hooks that suit the girls very well. Like the Sugababes, the do the upbeat pop thing so well, but they can adapt to the more slushier side of things and have done some reasonable covers.

Whilst they certainly wont be remembered in 20 years time, they are a sign of the times. Think along the lines of the Spice Girls with a kick up the arse. I tend to prefer their more upbeat style and i really do rate "Biology" as a very very good pop record.

Oh, for the record, i'm a Nicola man myself!
See 1 reply

Girls Aloud - a veritable avalanche of make-up, pouting and bare flesh. A project of 'Popstars: The Rivals', one of the earlier 'reality' music shows where 5 girls and 5 boys were picked from thousands of hopefuls to appear in two single-sex bands who would then go head-to-head for the number 1 chart slot.
The male band were picked by Pete Waterman who being a bit of pop traditionalist went down the 'vocal harmony group' route well trodden by the likes of Westlife with One True Voice.
So when it came down to the final and the two bands performing their respective songs on one hand we had One True Voice with their sharp suits and syrupy lyrics and on the other we had 5 blindingly attractive young ladies (ok, 4 and a half - the jury's always been out on Nicola) in skimpy outifts shaking their collective booties to the immediately arresting and upbeat 'Sound Of The Underground' - a tune that sonically was a distant cousin to 'Addicted To Bass' by Puretone.

Guess who won? Well I say won, Girls Aloud completely thrashed the passe OTV into the ground, grabbed the number slot by a considerable margin and went on to greater successes. Meanwhile One True Voice disbanded within 6 months....

So what we have now is a girl band as geared towards the Nuts and FHM reading blokes as cd-buying teenage girls. Far more mature and sexually provokative than the (with hindsight) childish Spice Girls. Whatever you think about the songs, the girls themselves and the whole nature of reality talent shows, someone is consistently pushing the right buttons as the hits seem to be still racking up after 5 years - aside from the odd blip (Cheryl ending up in court after a to-do with a bathroom attendant in a club) the mixture of upbeat numbers, movie song placements, charity records, and kitsch cover versions seem to keep the lasses going for longer than your average girl group.

Me? Im a Nadine man myself :P