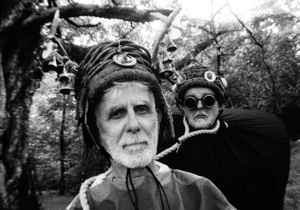 Profile:
Renaldo Malpractice (Brian Poole) and Ted the Loaf (David Janssen) are a bizarre, insanely creative duo of Brits hailing from Portsmouth. Their music is wacky and fun, strange and unexpected. "Discovered" by the Residents after they released a cassette version of their first recording, they were signed to Ralph Records and produced 3 albums between 1981 and 1987. Following a series of deluxe reissues of their albums from 2013 to 2016, the duo reunited to release their new album 'Gurdy Hurding' in 2016. In 2018, they released their live album, entitled 'Long Time Coming', featuring their first concert nearly 40 years.
Sites:
renaldoloaf.com, MySpace, Bandcamp, Facebook, Wikipedia
Aliases:
Struvé / Sneff
Members:
Brian Poole (2), Dave Janssen
Variations:
Viewing All | Renaldo & The Loaf
R.A.T.L, R.A.T.L., RATL, Renaldo And The Loaf, Struvé & Sneff, Struvé / Sneff

Without doubt the weirdest bunch to come across this planet. Although many will pin them a 'Residents' tag across their foreheads, Renaldo & the Loaf albeit confusingly parodic to music, seem far more sophisticated than their US obscure twin brothers - and that can be heard in a whole list of impressive records, from 'Songs For Swinging Larvae' through to 'The Elbow Is Taboo'... Electronics that seem to go on cocaine all by themselves in an array of abstract funny noise. Renaldo & the Loaf, where are you these days?