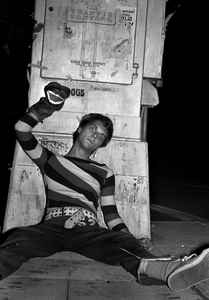 Real Name:
Geza Gedeon
Profile:
Best known for his work as a producer on the L.A. punk scene, Geza X also cut one bizarre solo album that remains a cult item for scene aficionados. Born to Hungarian parents, Geza (his real first name) adopted the "X" moniker in tribute to Malcolm X, and got his first recording studio job in the mid-'70s. He soon moved on to become the soundman at the legendary L.A. punk club the Masque, and spread the word that he was interested in producing. The Germs' Darby Crash tapped him to produce the band's landmark debut single "Lexicon Devil," and from there X went on to helm seminal Cali-punk moments like the Dead Kennedys' "Holiday in Cambodia" and Black Flag's "Six Pack." He also worked with Weirdos, the Avengers, and new waver Josie Cotton ("Johnny Are You Queer?"), among others, and played as an instrumentalist in both the The Bags (a female-fronted group who wore bags over their heads) and The Deadbeats.

someone please tell me there's something, ANYTHING documenting this obscure project he played guitar in... this sounds incredible. no studio recordings... a live tape maybe? please!