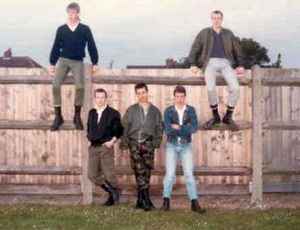 Betrayed were formed in the Summer of 1984 by Skins; Vince and Mark, Droog Terry; Suedehead Steve and Punk Andy, all mates who used to 'ang around down the front - the harbour and seafood market area of Folkestone on the South East Coast. Brothers Mark & Steve, used to work on their uncle Chummy's famous seafood stall.

It was the seafront amusement arcade culture that brought the lads together, playing the tables in John's Pool Rooms - Space Invaders & Popeye in the Golden Nugget and scoffing down chip buttys in José's Chip Shop in Tontine St. This, along with their mutual interest for all things Oi!, Punk and Hard Rock and, after seeing Black Flag in their hometown 1985 (Stones club, Tontine Street) - American Hardcore.

Saturdays were often spent in WHSmith thumbing through 'SOUNDS' weekly music paper, to see what new records were out and what bands were gigging. Then it was down to Hummingbird record shop in the Old High St. to flick through the vinyl racks before heading off to the Terraces of Cheriton Rd, to support Folkestone Town footy club with chants of 'SEA-SIDE, SEA-SIDERS'