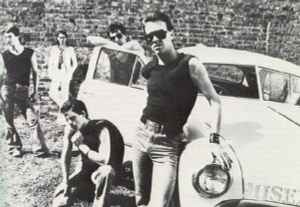 Mi-Sex were formed out an earlier band called Fragments of Time, which in turn came from Father Time. Both earlier bands were in the prog-rock genres and known for their solos and lighting (and smoke). They became Misex (then Mi-Sex) after the punk explosion in an effort to stay contemporary, the band name inspired by an Ultravox track name, 'My Sex'. Their debut single was on EMI, before moving to Australia, where their earlier history (including Steve Gilpin's earlier career as a cabaret and covers singer) was unknown, and immediately broke with Computer Games which was number one at the end of 1979. Steve Gilpin died after a car crash in 1992.

The band reformed briefly in 2011 and recorded a new album Not from Here, issued in 2016. The vocalist was Steve Balbi.