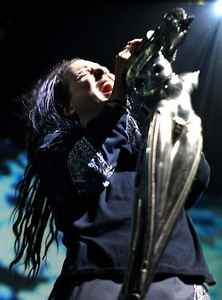 Most famous for being the vocalist of the nu-metal band Korn. Started singing in bands during high school. Played with the band “SexArt”. Was discovered by James 'Munky' Shaffer and Brian 'Head' Welch when he was playing with Sexart. Joined “L.A.P.D. (4)” as lead vocalist renaming the band Korn. Replaced singer Richard Morill.

Davis has frequently been a guest musician in various other bands. As of 2007, he also has his own solo-project, “Jonathan Davis And The Simply Fucking Amazings”. Their acoustic performances contain seldom-played Korn tracks, as well as tracks he helped producing but could not play with Korn. Davis also started performing as a DJ as of 2009 under the name “J Devil”.
Davis also had a fairly small acting career.

Davis has displayed a wide variety of vocal styles over the years. He is well-known for putting his emotions in his songs. His scat, or incredibly fast and gibberish-style singing, is very prominent in Korn. It is known as korn-jabber. He screams, whispers, grunts, wails, he even weeps during songs. As a child, Davis was sexually abused by a close friend of his family. The song Daddy is about this abuse and the fact that his parents didn't believe it was happening. As well as being Korn's lead singer, he has also plays drums and bagpipes. Davis writes songs on guitar and other various instruments, such as glass harmonica and bagpipes.

January 30, 2008
I've seen the latest Korn show in the Netherlands just yesterday. Only Jonathan and Fieldy attended, as Munky had to go home for his sick father. Still the show rocked! On this show I bought the CD and DVD album of the solo tour of Jonathan. This is something quite different from what you're used from him. All acoustic performances and another repetoire as done with Korn. He plays the more sensitive Korn-music with tracks from his production "Queen Of The Damned" and some tracks never heard before. This is when I realised that Jonathan Davis is Korn, no matter what band acoompanies him. The biggest comment on Jonathan and Korn and their latest album is that the music is becoming softer and simple. Jonathan's reaction was "if our album was commercially succesfull I would consider that a personal failure"! That is what I like about Jonathan, he makes music like HE wants to and not what others want him to make. Go on JD! Looking forward to new (solo) material!
Reply Notify me 2 Helpful