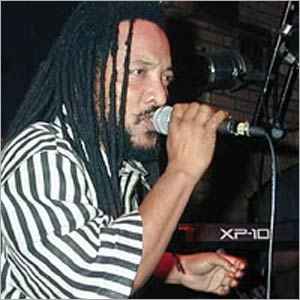 Profile:
Born in 1957, Roman Stewart was the younger brother of Tinga Stewart. Singing on the streets for money as a kid already, he made his first recording in 1968, being only 11 years old. His first breakthrough came 1974 with the hit "Hooray Festival", followed by "Hit Song" in 1976. Roman recorded for some of the biggest Jamaican producers, like Phil Pratt, Everton Da Silva and Linval Thompson, for whom he recorded his famous "Rice And Peas" in 1979.
Roman Stewart emigrated to New York in 1976, where he stayed for the rest of his life, recording some tunes occasionally, until he passed away in January 2004 after a heart attack.
Sites:
upsetter.net
In Groups:
Stewart Brothers
Variations:
Viewing All | Roman Stewart
Little Roman, Norman Stewart, R. S., R. Stewart, R.stewart, Roman, Roman Scottland, Roman Steward, Roman Stewert, Roman Stuwart, Romeo Stewart, Romie Stewart, Stewart, T. Stewart