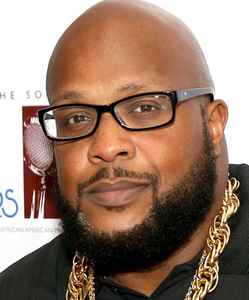 Real Name:
Richard Simpson
Profile:
Chubb Rock, born in Jamaica and raised in Brooklyn, is regarded as one of the East Coast's most dexterous rappers. A former National Merit Scholar, Chubb began his career in earnest after dropping out of high-post Brown University, where he was a pre-med student. So nicknamed because of his ample height and girth ("6 foot 4 and maybe a quarter of an inch bigger/than last year but still a unique figure" - from "Treat 'Em Right"), Chubb released his first album for Select records in 1988. Chubb Rock Featuring Howie Tee featured the underground hits, "Caught Up" and "DJ Innovator." 1989's And the Winner Is... earned Chubb Rock a lot more notice, and in the early '90s Chubb had a number of hit singles including "Ya Bad Chubbs," "Treat 'Em Right" and "Just the Two of Us."
Chubb's career was proving most prolific, and was largely responsible for starting the careers of the Trackmasterz -- Poke and Red Hot Lover Tone. His dancers even put out an album under the name of the A-Teem titled A Hero Ain't Nothin' But a Sandwich. After the release of I Gotta Get Mine Yo in 1992, Chubb fell off the musical map until mounting a comeback with The Mind in 1998.
Sites:
chubbrock.com, Facebook, instagram.com, Twitter
Aliases:
Richard Simpson (2)
Variations:
Viewing All | Chubb Rock
C. Rock, Chbbrock, Chub Rock, Chubb Rocky, Chubb!, Chubbrock, Chubbs, Mr Rock