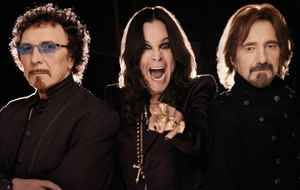 Profile:
Considered by many to be the first heavy metal band, Black Sabbath was formed in 1968 by Tony Iommi, Ozzy Osbourne, Geezer Butler and Bill Ward.
The band's original name was the Polka Tulk Blues Band (later shortened to Polka Tulk) and later on changed to Earth (12) before becoming Black Sabbath inspired by an Italian horror movie of the same name.
The original line-up lasted until 1979, after which Osbourne was fired and replaced by Ronnie James Dio. The line-up changes would continue, with no line-up remaining intact for consecutive studio releases. Throughout the changes, only Tony Iommi and keyboardist Geoff Nicholls, who also joined the band in 1979, would remain with Black Sabbath, although Nicholls would not always be credited as a full member. In 1997, Iommi, Butler, Ward, and Osbourne reunited, touring and releasing a live album in 1998, although a long-rumored studio release did not appear (the group attempted to record a new album in 2001 with producer Rick Rubin but the sessions were scrapped). After that, the group periodically reunited to tour with Ozzy's "Ozzfest" tour. In 2004, longtime keyboardist Geoff Nicholls was replaced by Adam Wakeman for an Ozzfest tour. No reason was given for the replacement. In 2006, the original line-up was inducted into the Rock 'n' Roll Hall Of Fame.

March 8, 2021
Just about as overrated as they are underrated. A lot of the tracks early on are sloppy and of bad fidelity. Their drummer for at least the first five years was really bad. I am from the school that all great rock bands have great drummers, which is why I easily place Zeppelin far above acts like the Beatles, the Rolling Stones and others.
There are reasons why they never get mentioned as GOATs, it is their music and lifespan. Perhaps the only more overrated band is The Beatles.
Cheers.
Reply  See 20 replies Notify me 4 Helpful

August 20, 2019
The remasters done back in 2016 for CD releases are extremely well done. I think these remasters were also used for the 2012 vinyl releases as well. I'd recommend listening to those now over the originals any day.
Reply Notify me 6 Helpful

October 20, 2018
Could not agree with you more on what you had typed, never cared for the Dio Years....still good but nothing that came close to the first six-seven albums in my opinion.
Reply  See 2 replies Notify me 3 Helpful

August 25, 2018
The first 6 LP's are phenomenal. Black Sabbath created such amazing music they can be considered the Beatles of heavy music. Their influence has now probably outstripped that of Led Zeppelin, in terms of the genres they inadvertently inspired and spawned.
It's hard to conceive of any other heavy band with catchier riffs and a better band chemistry, each original member was so vital to the sound and impact of their music.
Sadly, once Ozzy departed, they failed to hit the same heights, though, as people are often keen to impress on each other, there were some gems hidden amongst the straw of their varied post-Ozzy output.

Black Sabbath kicked loose rock that's still setting off avalanches of creativity across the musical landscape, the harbingers of heavy metal in all its glory! Their phenomenal first four albums -- Black Sabbath, Paranoid, Master of Reality, and Vol. 4 -- remain the clearest articulations of heavy metal vocabulary to date. Bassist Geezer Butler, the man responsible for the lion's share of Sabbath's early hits, focused his lyrics on social ills, self-destructive behavior, fantasy and the occult, setting forth the primary concerns which continue to preoccupy Metal bands from velocity addicts Venom and Napalm Death to sludge fiends such as Monster Magnet. Lead guitarist Tony Iommi's loose tunings revolutionized the craft of electric guitar by uncovering unsuspected fuzzy depths. And, of course, Ozzy Osbourne's manic live performances introduced an element of pure theatricality that remains central to Metal's identity. Beginning with '75's Sabotage, Sabbath's credibility has been constantly imperiled by failed experiments in Prog-ish rock. With the exception of the Ronnie James Dio albums of the early '80s (Heaven and Hell and Mob Rules), the moments when Sabbath play up to their ability have been few and far between. Perhaps aware of this themselves, they convinced Ozzy to return to the fold in the late '90s for a series of penitential performances focusing on their glorious early material