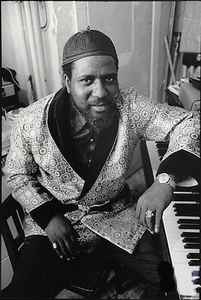 One of the most influential pianists of the twentieth century, Thelonious Monk had a idiosyncratic improvisational style and made numerous contributions to the standard jazz repertoire. He is often regarded as one of the founders of bebop. Monk's prolific compositions and improvisations are full of dissonant harmonies and angular melodic twists. His unorthodox approach to the piano combines a highly percussive attack with abrupt, use of silence and dramatic pauses. He was also known for a distinct fashion sense in his suits, hats and trademark sunglasses. Monk was an unconventional stage presence, known for getting up from his piano to dance (sometimes in a counter-clockwise motion which drew comparisons to ring-shout and Muslim Sufi whirling) while his band members were still playing. Monk is one of only five jazz musicians to date to be featured on the cover of Time magazine, which puts him in a select company with Louis Armstrong, Duke Ellington, Wynton Marsalis, and Dave Brubeck.

The way Thelonious plays his Waldhorn has always touched my soul.

October 10, 2017
Happy centennial to the High Priest of Jazz!! He changed music forever!