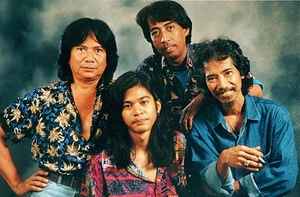 Profile:
One of the most popular groups in Indonesia, they were a continuation of Koes Bersaudara (the Koes Brothers) when drummer Nomo left in 1969 and was replaced by Murry. They have played a wide variety of styles including Melayu (Dangdut), Pop Jawa, Keroncong, Instrumentalia, Hard Beat, folk, Islamic (Qasidah), and Christmas songs (Natal). In Indonesia today there are scores of Koes Plus cover bands, yet the band still plays, although without Tonny, who passed away in 1987.
Sites:
koesplus.org, Wikipedia
Members:
Murry, Tonny Koeswoyo, Yok Koeswoyo, Yon Koeswoyo
Variations:
Viewing All | Koes Plus
Koes Plus '78, Koes Plus '79, Koes Plus '87, Koes Plus / Bersaudara, Koes-Plus, Kus Plus