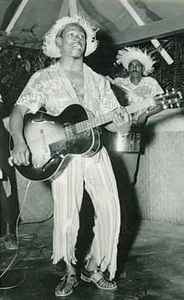 Sometimes called the "Calypso King of Jamaica," Lord Flea was this island's first international music star. He primarily performed mento, a major form of popular music in Jamaica that was similar to calypso. During the 1950s, he was active in the nightclub scene and, while still a teenager, attracted much attention with his composition "The Naughty Little Flea." In 1954 Lord Flea and his band were such a sensation at the Glass Bucket nightclub in Kingston that they were recruited to play in Miami. In later years, Harry Belafonte recorded several of Flea's songs, as did Miriam Makeba and Toots and the Maytals, among others. Flea died tragically in Miami in 1959 at age 27.
Sites:
mentomusic.com, calypsoworld.org, Wikipedia, imdb.com
Aliases:
Norman Thomas (2)
In Groups:
Lord Flea & His Calypsonians
Variations:
Viewing All | Lord Flea
Flea, Lord Flee