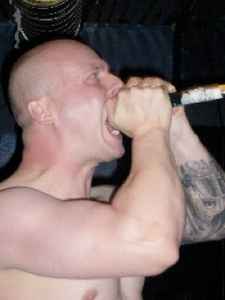 Profile:
A Finnish power electronics slash harsh noise project initiated in 1992 by Pasi Markkula. The thematic subject matter is founded in extreme sexual transgressions, and rests within a totalitarian fetish culture at the explicitly perverse spectrum of human erotics. Central concepts within this context are pleasure carnage and death ritualization; mixed with an affixed seething desire to exercise fetid sexualized violence and humiliate the contemporary - sans safewords - towards utter degradative collapse. BU makes no attempt to conceal his predatory filthy devotion. On the contrary: With sadomasochistic affection, hate symbolics and iron hard cock; Bizarre Uproar blatantly edict to strangle and fuck the world into cold end. The fervor for mass annihilation and the ultimate cleansing originate from corporeal anti-social instincts as lust and hate that urge to burst - explode - in all directions… Leaving only crushed hope and nothingness in its wake. Can you hear the boots and latex clad masses hailing? "Verillippu nousee! Ky Nouse!!"

Everything about Bizarre Uproar sounds like anxiety, fear, isolation, worry, desperation and pain. His music matches the sensation of the most extreme feelings of panic. You feel as if nothing is safe, nothing is happy, and you are about to be caused severe anguish and pain at any second.

He is a power electronics genius and rivals everybody else in the scene, while he has some mediocre material here and there the vast majority of his work is punishing and ruthless.

Every noise fan should listen to something by Bizarre Uproar.