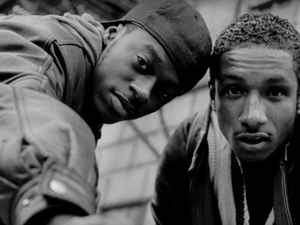 One of the slightly lesser-known groups of the NYC-based Native Tongues Collective (of which A Tribe Called Quest, Brand Nubian, De La Soul, and Jungle Brothers were the better known member groups), the duo rapidly gained success with their debut album "A Wolf In Sheep's Clothing" (1991) on the back of a string of well-received singles: "Flavor Of The Month", "Similak Child", "Strobelite Honey", and especially with the release of the remixed single "The Choice Is Yours (Revisited)".

The follow-up album, "Non-Fiction" (1994), did not fare nearly as well, partly due to a tepid critical response, but also a lack of support from the record company. It spawned the singles "Without A Doubt" and "North South East West".

After that album failed to build on the momentum of the debut, the group remained relatively inactive for the rest of the decade, with exception for Dres using the moniker "Dres The Black Sheep", who released a semi-successful solo album titled "Sure Shot Redemption" (1999). They eventually returned with their long overdue third album entitled "8WM / Novakane" (2006). Shortly after that, Mista Lawnge left the group while Dres continues to release music under the Black Sheep name.
Sites:
MySpace, web.archive.org
Members:
Andres Titus, William McLean
Variations:
Viewing All | Black Sheep
Black Seep, BlackSheep, Blacksheep, The Black Sheep