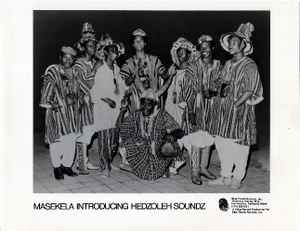 Profile:
"Hedzoleh ("freedom") Soundz was formed in Accra, Ghana in the late 1960's. Leader Stanley Todd Kwesi assembled a monster ensemble of musicians from the Ghana Arts Council, intending to form a new Afro-Rock group that would be more traditional & African in sound, and hopefully surpass Osibisa in popularity (alas it was not to be). Their original songs were based upon traditional Akan & Ewe music, and employed dark, organic sounding African-made drums instead of modern western congas/drum-kit."
They released their first LP on Blue Thumb in 1973. Many regard it as the finest African jazz-funk fusion album ever made, largely due to the brilliant merging of the band's own sounds with the trumpet of their guest soloist - Hugh Masekela. Indeed, some argue that this LP is also his best. Interestingly, Masekela was introduced to Hedzoleh by none other than Fela Kuti. Masekela worked with a primordial version of Hedzoleh as early as 1967, when they played at Monterey, so by 1973 they were familiar with each other's styles.
Drawing upon the rhythmic traditions of their native Ghana, Hedzoleh Soundz combines traditional African and contemporary western instrumentation. Their unique African sound blends songs in Ghananian languages with a style that has become known as "West African Highlife."
Sites:
hedzolehsoundz.com
Members:
Amartey Lash Laryea, Frankie Todd, Joe Miller (20), Richard Neesai, Stanley Todd Kwesi
Variations:
Viewing All | Hedzoleh Soundz
Hedzoleh, Hedzoleh Sounz