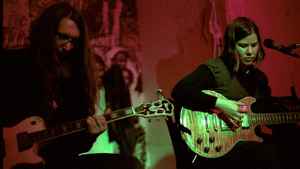 Profile:
Charalambides is a trio of Texas creative musicians performing extended guitar and voice compositions and improvisations. Their music moves between poles of tonality and atonality, utilizing volume, space, silence, folk and psychedelia, and the scrape and hiss of steel on steel. Initially conceived as a recording project, the group has steadily evolved toward music of a more public nature.

Formed in Houston in 1991 (and relocated to Austin in 1997), Charalambides has evolved through various configurations based on the core duo of Tom & Christina Carter. From 1993 to 1996 they performed and recorded with guitarist Jason Bill (currently with Arizona duo Migrantes), and since 2000 the lineup has included steel guitarist Heather Murray (formerly of Ash Castles on the Ghost Coast).
Sites:
Bandcamp
Members:
Christina Carter, Heather Leigh Murray, Jason Bill, Kyle Silfer, Tom Carter