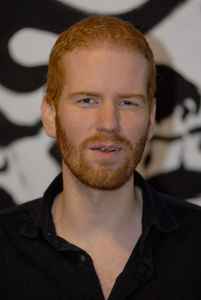 Real Name:
Red Wierenga
Profile:
Red Wierenga is a pianist/accordionist/respectronicist/improviser currently based in New York City. As a musician, Wierenga is primarily concerned with the interstices of electronic and acoustic sound, composition and extemporization, and free jazz and free improvisation. He works to interface acoustic instruments with electronics and builds physical devices for the control of computerized sound, producing new instruments and meta-instruments. He designs both his self-termed “respectronics” and his compositions to be particularly conducive to improvisation. His software creations have been used in performances by musicians including Keith Rowe and Jim Black. Wierenga received his Bachelor of Music from the Eastman School of Music, where his teachers included Harold Danko and Ralph Alessi. In 2004, Wierenga moved to the Netherlands, where he studied electronic and computer music at the Institute of Sonology at the Royal Conservatory in The Hague. There he studied with Joel Ryan and designed and built the first Respectron, a novel physical interface for gestural control of electronic music.
Sites:
redwierenga.com
In Groups:
Signal (9), The Claudia Quintet, The Respect Sextet