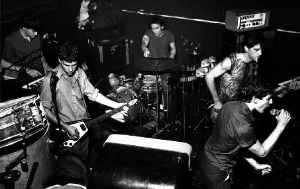 Wall of Voodoo had its roots in Acme Soundtracks, a film score business started by Stan Ridgway, who was later the vocalist and harmonica player for Wall of Voodoo. Acme Soundtracks' office was across the street from the Hollywood punk club The Masque and Ridgway was soon drawn into the emerging punk/new wave scene there. Marc Moreland, guitarist for local group The Skulls, began jamming with Ridgway at the Acme Soundtracks office and the soundtrack company soon morphed into a new wave band. In 1977, with the addition of Skulls members Bruce Moreland (Marc Moreland's brother) as bassist and Chas T. Gray as keyboardist, along with Joe Nanini (who had been the drummer for Black Randy and the Metrosquad) the first lineup of Wall of Voodoo was born.

May 3, 2019
A truly great western band, MK1 featured Stan Ridgway, and Joe Nanini's unique percussion, MK2 brought in Andy Prieboy who knew his way round LA Noire. Holding it together all the way was Chas T Gray (one of few who still used the MiniMoog in the 80's) and Marc Morelands (RIP) fantastic guitar playing.
See 1 reply

January 31, 2019
Why are so many members deleted from lineup? They all should be reinstated.

August 19, 2016
A truly important band; the premier purveyors of urban American ballads infused deeply with the spirit of the Wild West. Stan the man is the voice of lost America. A unique sound whose nearest contemporaries would be Tuxedomoon in their early days. Oddball electronics, a seriously chunky wild west guitar, driven, manic music and Stan the man. Perfect. The initial 12" release is an essential wonder and includes the most awesome version of "Ring Of Fire". Pure wild west, expanded upon through the first two LP's and culminating with the epic ballad, "Call Of The West" on the self-titled second album. The magic died when Stan the man exited stage left.

Check out "Crack The Bell" live if you can find it. Pure mania.

June 29, 2015
An innovative and iconoclastic new wave group from L.A., Wall Of Voodoo could only have existed in the early 1980s, intelligent youths soaking in the cold war paranoia and mesquite-flavored sands of the Southwest. Their music is a peculiarly potent infused tequila/gasoline-fueled juggernaut of narrative and percussion, angular declarations like letters home from disillusioned robots at war. For me, Wall Of Voodoo truly only existed for their debut EP and first two albums: the chemistry between Stan Ridgeway and the band felt like the relationship between the brazen, carefully-carved cuckoo bird and the rusty, trusty gears of the clock. The band became something else after Stan left; not necessarily lesser, but less necessary. However, the recordings the group made up through 1982-83 are really something special. Dark, moody, intense, uneasy, but beautiful. Recipe for your clear-skied, dark, hot summer night: Cold cheap beer with limes, "Repo Man", then Wall Of Voodoo.