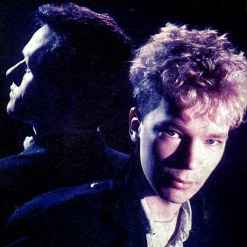 This band is all but forgotten now. But for a brief moment in the mid-80s, in the wake of a-ha's commercial success, FLL were considered Norway's new bright hope on the pop market (it should be added that a-ha's achievements injected a proportionless optimism in the music business and media in this country, particularly as Norwegian bands' previous attempts to impress an international audience had all been notably lacklustre). FLL, who coined their weird name from an Italian renaissance painter, landed a lucrative recording deal with Virgin in 1985 on the strength of their excellent hit single "Shouldn't Have To Be Like That" and the album "Songs", and shortly afterwards they went to the US to record an LP which the label hoped would give them the The Big Push. Those dreams would soon be shattered, but although the band's (or rather their label's) quest for international stardom ultimately flopped, FLL still recorded some quality music, and they would also enjoy considerable success in more remote parts of the world.

Although they made their name with sophisicated, jazzy pop music with a distinctly polished touch, FLL originally came from the alternative scene, their first album "In Silence" (1981) being a gloomy piece of gothic-inspired post punk / new wave which was moodier than a Joy Division fan on a bad hair day. I'm no goth fan at all, but I still find "In Silence" an enjoyable, if slightly depressing listen (the fact that Rune Kristoffersen provided the vocals at the time doesn't make the music any more uplifting - his strangely indecipherable delivery gives the music a hollow, abstract touch). However, the band's style would change radically with 1983's "Small Mercies"; at this point, vocalist and multi-instrumentalist Per Øystein Sørensen had joined the band, and the sound became much more accessible and pop-oriented. This transition was completed on their third album "Songs", a finely crafted melancholic pop album which is their best effort to date.

Virgin then drafted Steely Dan's Walter Becker to produce their next album, and sent Kristoffersen and Sørensen across the dam, hoping that they'd return with a mega-seller (Norwegian journalists even joined the duo to provide reports from their recording sessions in LA). But the band's west coast adventures produced decidedly mixed results; Walter Becker's habitual perfectionism, a ton of guest musicians and a prolonged recording process all contributed to making the album a somewhat over-polished and directionless affair. And when "Light And Shade" finally appeared in the shops in late 1987 in one of the tackiest sleeves ever seen, the public's interest had definitely waned, and Virgin didn't even bother to launch the album on the American market before they eventually dropped them altogether. FLL would nevertheless record another two albums in the following years, and while the rest of the world stopped caring about them, the duo would, in a weird parallell to a-ha's post-80's following in Brazil, enjoy enormous popularity in the Philippines, of all countries.

In the mid-90's, FLL more or less ceased to exist; Rune Kristoffersen instead proceeded to form the Rune Grammofon label, which would release everything from avantgarde and noise to jazz and folk music (including his own electronic improvisational project Monolight) to regular acclaim in publications such as The Wire. Per Øystein Sørensen, on the other hand, would appear in less rewarding settings such as the Eurosong contest before relaunching FLL as a solo project in 2003 (with Kristoffersen's blessing) - however, the new album he recorded ("In a Brilliant White") was apparently never released outside their core market in East Asia. Around the same time, Kristoffersen reissued some of the older FLL material on Rune Grammofon on two compilations, but due to copyright issues with Virgin, some of songs that appear on the "Best Of" album are inferior re-recorded versions. Either way, FLL remains a band of the "they could have been massive" variety that actually made some very fine music.