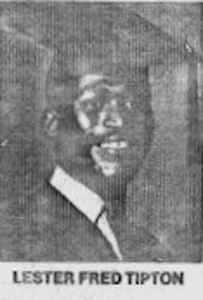 Real Name:
Lester Fred Tipton
Profile:
Lester Tipton was originally from Detroit, USA, gained popularity in his youth with his twin sister Leslie as dancers on "Swinging Time," a local variety television show. The body of Tipton, 33, a resident of Los Angeles at the time of his death, was discovered by his sister in 1982. He had been beaten and robbed. Twins Lester and Leslie were high school celebrities in the late 60's as regular performers on Robin Seymour's "Swinging Time" dance program, which aired on Channel 9. The two were not only noted for putting popular steps to music, but for their mode of dress as well. Both were fashion-conscious teens with high-style tastes. Their dancing ability, however, won them national recognition when chosen to represent Detroit on Dick Clark's "American Bandstand" competition. They topped the grand finals in 1968, winning two cars and a trip for their parents to Florida. The team decided to pursue their interests in California, where they both became involved in fashion activity and films. " The twins were seen on television in a "Dynasty" episode and on "The Love Boat", sadly the same day after his body was discovered." Tipton had moved back to California following a year in New York, where he graduated from a school of cosmetology. In Detroit, he attended Goldberg Elementary, Hutchins Junior High and Northern High Schools, and was a member of Mt. Zion Missionary Baptist Church.