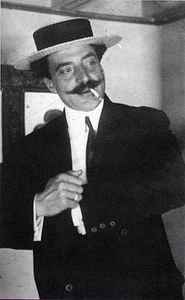 Trilussa lived a very poor childhood, as his father had died when he was only three years old. After irregular studies, he made a very early poetical debut in 1887 on the Rugantino magazine directed by Alfredo Zanazzo. Later he wrote also for Don Chisciotte, Capitan Fracassa, Il Messaggero and Il Travaso delle idee. His first collection, Le stelle de Roma ("Rome's Stars"), is from 1889

Trilussa's fame grew in the 1920s and 1930s, though he was not a part of any literary circle, preferring to be in the streets and taverns, which were the source of his inspiration. His poetry features the petite bourgeoisie of Rome: the housewife, the store clerk, the servant, but also contain strong satirical denounces against governments and the vices of rich people. Some of the sonnets are Aesop-like moralistic fables. Trilussa's own sketches and drawings were featured alongside his poetry.

A very popular person in his city and Italy, Trilussa was named Life Senator on December 1, 1950, by the Italian President Luigi Einaudi. He died twenty days later.

In the work known as Illustrissimi, a collection of letters written by Pope John Paul I when he was Patriarch of Venice, Trilussa is one of the recipients of the letters.
Variations:
Viewing All | Trilussa
Trilussa (Carlo Alberto Salustri)