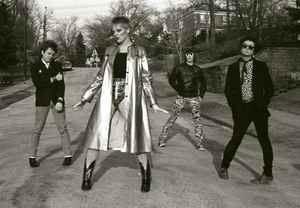 Profile:
Canadian punk band from Toronto active in 1978-79.
In Toronto, in the late spring of 1978, Vera 'Rabies' Skye met guitarist John Ziegler and started collaborating on the first Tyranna songs, including 'Unfaithful/Divorce' and 'Shock Face.' In mid-June Ziegler enlisted Gerry 'Johnny Bubblegum' Smith on bass, and the three musicians met for just two rehearsals, and one impromptu neighborhood photo session with Don Pyle.
The next Sunday, the first full band rehearsal occurred, with drummer Dave Porter and second guitarist John Tucker. In the next three days, Tyranna added 'Johnny' and two covers, and that Thursday, Friday and Saturday debuted at The Turning Point, opening for The Ugly. Tyranna took Sunday off, then over the next few days recorded their first batch of songs on Tucker's trusty 4-track Dokorder 1140.

Rabies presented an opinionated, intelligent, dominant personality that had the self-confidence to mix in playful, child-world elements, as heard on 'Johnny' and 'Divorce'. Her tough, rapid-fire delivery was never contradicted by her strong sense of melody. Ziegler played a gold-top Les Paul, self-modified with a third pick-up, held in place with bandages, that produced a unique fuzz tone. Bubblegum favoured 'all-downstrokes' picking to drive both steady root notes and fluid runs. John Tucker played angular, alternate-tuning riffs, using a sharp, clean Telecaster twang to off-set Ziegler. Dave Porters' drumming featured jazz flavours, and it was his and Tucker's quirky art stylings that finished off Tyranna's unique sound, which The Dents labeled "sophisto-punk." Ziegler mysteriously left the group mid-recording session, never to return. Without him, Tyranna played two more gigs, supporting The Curse, and recorded a seconds set of songs at Porter and Tucker's Wade Avenue loft, before disbanding.

Rabies soon met Ronnie Partridge and the two began the song-writing partnership that produced the majority of Tyrannas new material. Ron's hard-edged Les Paul/Marshall sound toughened Tyranna, while new songs also introduced more accessible pop stylings. Cleave Anderson, fresh out of the Battered Wives, brought his rock solid, powerful drumming as well as new songs like the tough, 'Back Off Baby'. The new Tyranna line-up, benefitting greatly from Cleave's experience and rhythmic stability, debuted Feb 1,2,3,4,1979, and quickly gelled into a strong live band with a striking visual presence. Mike Nightmare, of The Ugly, quipped that seeing Tyranna was like looking in a candy store window.

An opportunity to help The Edge's famous Two Gary's fill a last minute opening slot for The Dils began an unofficial management relationship. Throughout 1979 Tyranna opened for many local bands as well as touring acts like The Members and Jayne County. Tyranna's climax was two sold-out nights at the Danforth Music Hall opening for Iggy Pop's all-star New Value's tour. Tyranna proved their power by gaining an encore, a point further emphasized when the second slot act did not. Wilder Penfield III, in the Toronto Sun, awarded Tyranna a strong review, and eventually listed the concert in his Top Ten gigs of 1979, pointedly crediting the openings acts' contributions.

On the recommendation of Forgotten Rebel Mickey de Sadist, Tyranna recorded five tracks at Hamilton's Basement Studio. Micky joined in the back-ups on Neighbour. The Gary's promoted the tape, Tyranna declined a suspect English record offer, then accepted an invitation to the "No Pedestrians" compilation. Ironically, the offer inflamed internal conflicts, Bubblegum was not invited to the recording and he promptly quit the group, and Tyranna soon disbanded. Shades Magazine called for someone to release the original Tyranna demos, but it took thirty years for an EP to finally appear, in 2008.
In February 2011, RaveUp! Records from Italy will release the Tyranna LP featuring all of the bands studio recordings plus two live songs from Tyrannas last gigs at The Edge January 1980.

Whenever Toronto’s punk scene of the late 70s is discussed, it’s usually the Diodes and the infamous Viletones that get name-checked, while other important bands of the era are overlooked.

In some cases, there are good reasons why groups that regularly played the main punk venues of the era like the Turning Point, Larry’s Hideaway and the Crash ’n’ Burn are now largely forgotten.

Tyranna’s best work wasn’t released on singles at the time, and they rarely ventured outside the city during their brief run in 1978 and 79. This explains why the energetic pop-punk crew led by the snarly Vera “Rabies” Skye, who split bills with Iggy Pop, Jane County, the Members and the Dils, isn’t better known today.

It may be 30 years too late, but Tyranna’s long-rumoured early demos, finally being released this week by the Boppa Do Down label as a four-song 7-inch EP, show the band’s tremendous promise.

“I’m really excited to finally be getting this early Tyranna material out there,” says bassist Gerry “Johnny Bubblegum” Smith, also of the Wayouts.

“For years, the only thing that’s been available is the song Back Off Baby from the No Pedestrians (Chameleon) compilation, which was later bootlegged for the My Girlfriend Was A Punk collection. So now people will finally get to hear the sound of the early band.”

When Smith refers to the early version of Tyranna, he’s referring to the the lineup that played the group’s first shows at the Turning Point in the summer of 78, when he was still a teenager.

“In my last week of high school in Burlington, I got a call to audition for a band in Toronto. I showed them I could play bass to Teenage Head’s You’re Tearin’ Me Apart, and that got me the job. So it was Johnny Ziegler, Vera Skye and myself in the band for the first two rehearsals.

“At our third rehearsal, Johnny told me we had another guitarist, a drummer and a three-night stand booked at the Turning Point, opening for the Ugly, at the end of the week. We took the Sunday off and then recorded our first demo.”

To celebrate the EP release, past members of Tyranna, including drummer Cleave Anderson, who would later join the Hi-Fis and Blue Rodeo, will be reuniting for a one-off gig at the Silver Dollar. Unfortunately, the group’s snarly lead singer, Vera “Rabies” Skye, won’t be performing.

On the upside, filling in will be Zoe Dodd of the Bayonettes, who’s well equipped to provide the appropriate sneer and swagger.
“Vera was such an important part of the band that it’s kinda heartbreaking that she won’t be able to make it to this show,” says Smith. “There are some health issues involved, and I’d like to just leave it at that. I hadn’t seen her for years – nobody had – so we had to find her when we were getting the EP ready for release.

“I remember her being really into things like parapsychology and alternative health practices – common now, but not in 1978. This was reflected in her songs, but beyond that there was a sophistication to her lyrics that you didn’t hear from other local bands of the period. It may not sound like cutting-edge music from today’s perspective, but I think we were doing something unique in Toronto.”
-nowtoronto.com
Members:
Cleave Anderson, Dave Porter (9), John Tucker, Johnny Bubblegum, Johnny Ziegler, Ronnie Partridge, Vera 'Rabies' Skye