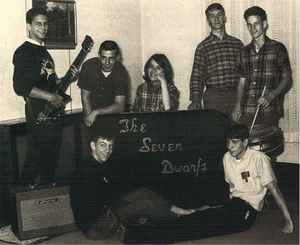 Profile:
A blue-eyed soul group from Lancaster, Pennsylvania, originally formed as The Seven Dwarfs. There was a suggestion that they became the Ambassadors in 1964, however it appears that only one member was in both groups
Members were: Sharon Herr (also on Keyboards), Rick Reardon, Ronnie Keene, John Helm and Jerry Ransing and with band members Denny Groff on guitar and Charlie Evans on Percussion.
Members:
Rick Reardon
Variations:
Viewing All | 7 Dwarfs (2)
Dwarfs, Seven Dwarfs, The 7 Dwarfs