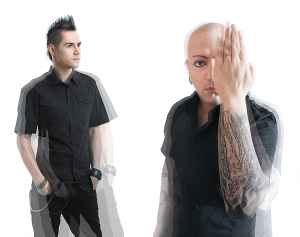 The band, started in 2001 as a trio including previous singer Paul Toohill , composes an airy blend of EBM, electronica, techno and trance, bringing their various visions and talents to life with synthetic vibrancy and danceable beats, crossing electronic genres with relative ease.

Aimed at the heart of the dancefloor, the music keeps listeners moving through the night in timeless waves, emitting subtle hints of the 1980s while slipping easily into sounds of the new millennium: glitchy patterns, sharp simulated strings, and clear vocals travel through bright sequences and brooding atmospheres.

After having released their first demo, "Forgiven", on the now defunct mp3.com website, and receiving good feedbacks, they signed a deal with the Polish label Black Flames Records, who would reissue the demo on May 2004 as "Forgive[n]", quickly followed by the "RE_Productions" EP in October 2004.
In several interviews though, the band seem to consider their real debut the 2005 album "Hrs:Min:Sec", released on the acclaimed German label Infacted Recordings.

Over the years, XP8 made a name for themselves due to their energetic live performances: the band played all over Europe, from their native Italy to Russia, and attended prestigious festivals like the Wave Gotik Treffen in Germany. Also their remix work is much sought-after, and bands as different as Attrition, Mortiis, Icon Of Coil and Dope Stars Inc. (among the others) has been remixed by XP8.

In 2013, XP8 released the crowd-funded concept album Adrenochrome, which they described as their best effort to date, without any record label support.

Everything came to a grinding halt in 2014 when the band decided to disband, quoting various reasons for this decision, among them the dwindling interest in alternative/industrial dance music, a trend that had a long run for almost two decades but that eventually ran dry. In an interview, Visconti also stated that “[...] no one wants to be the old guy in a room full of kids looking at you like a dinosaur: I remember vividly making fun of those old goths that simply didn’t want to get the fuck out of MY clubs a decade ago, and the last thing I wanted to become was one of them.” - clearly pointing out the necessity to make space for a younger generation to make things vital and vibrant once again.

Before disbanding, XP8 released a series of 3 EPs over a period of 9 months, each released tied to one of the phases of the Alchemical process: the three releases went on to be praised as the band's best material by critics and fans alike, proving how the Italian duo left a mark on the industrial scene for years and years to come. Steven Gullotta at Brutal Resonance stated that "XP8 may be dead, but their music will forever hold a place within my soul",[9] giving the band a good send off.
Sites:
MySpace, Facebook, Twitter, Last.fm, YouTube, SoundCloud, Bandcamp
Members:
Marco Visconti, Marko Resurreccion, Paul Toohill, Pylon People