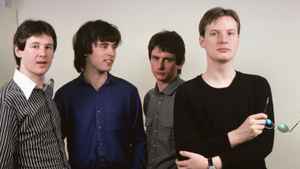 Almost twenty years ago I introduced a fellow Beatle-nut friend to XTC (who became suitably besotted with them) by playing him Side 2 of Oranges And Lemons and summarising the lay of the XTC land with this never-forgotten quip....”well Paul" I said "songwriting-wise it’s like this...if Colin Moulding is George Harrison, Andy Partridge is Lennon....AND McCartney.” Ha ha.
If George found it tough......

October 13, 2017
XTC have been with me since 1980, when Towers of London came out and I got Black Sea for Christmas and went to see them in Sheffield for the LP tour, just amazing and so so close to the studio sound, Andy Partridge for me is the best ever song and music writing of this generation.
Its a shame he after 1982 did not like the turing side 0f the industry, but he is not the only one, I still follow all of them and when I can get the cds by the groups which the members of XTC are now playing in or producing or writing for.

I am now trying to add to my large collection of XTC items, I have many mates who play guitar etc and to them the writing on English Settlement is the best they have done and this LP can not be touched by any group and i so agree.
It is funny that now it is 40 years since the first single, that a lot of young artists are looking to XTC as a band to copy or take from.
I have known of them for 37 years and still every day I have to put something on by them.
I hope this does not seem odd and that a lot get what am saying.
I do not play an instrument but have just loved the many many complex ways that the songs are formed.

March 4, 2011
Does anyone remember the name Beatles?? to the hell with them when i think about one of the greatest band ever around the world this 3 genious gathered in the late 70's a marvelous musique track by track a truly masterpiece of Band XTC could be nominated like the psychedelic insane version of Beatles and indeed they were indeed criminally ignored and under rated but despite of it they were perhaps the most succesful band in studio ever because they decided not touring anymore since 1982 due to stage fright people from Andy "Genius " Partridge but i was one of the lucky guys who saw them here in my country venezuela in 1981 playing here, an unforgetable moment when we didnt know yet what was about to come in the later years with this supreme band ,sometimes is such a relief of happines when i have in my ears music so gorgeous like this,thanks Andy for this marvelous treasure called music long life to XTC
See 1 reply

A quintessentially English pop.rock band, writing beautifully crafted songs with wit and humour. It's said that they would have achieved far greater recogition and success than they did were it not for Andy Partridge's pathological stagefright that prevented the band from touring - the total number of their gigs can probably be counted on one hand. Almost criminally ignored and under-rated, which is a crying shame as they are undoubtedly one of the best bands Britain has produced.