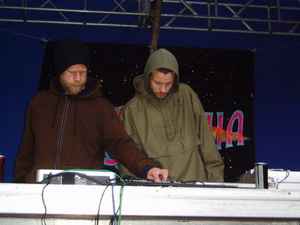 Though their surnames suggest it, they are not related. Originally from Örebro, Sweden, they now live in Malmö after deciding to move in early 2000. Having had several electronically-oriented projects in the past, it was during this year they started making psychedelic music together.
Both of them were members of various alternative rock bands during the period 1995-1999. At the end of this period their interest in electronic music had grown so strong it could no longer be held back.
Sites:
derango.se, SoundCloud, Facebook, Facebook, Bandcamp, parvati-records.com, Posterogs
Aliases:
Doctor Evazan, Doctor Purosurpo and the Evazan Orchestra, Nge.Duo, Purosurpo
Members:
Jens Eriksson, Ola Eriksson

Ola & Jens are definitely one of the most talented psytrance producers, they manage to create absolutely wicked and sometimes even funky "forest trance". I haven't heard anything like their music, it's a total class of its own. You can always spot the Derango track a mile away. They use tons of layers which can make the music sound very chaotic at first listens, but you start to get into the structures after a few listens and find that there's actually some little distorted melodies too. The atmosphere is always very foresty like the trees and gnomes hiding behind them were creating the music.
Been hooked on the stuff since the summer of 2004.