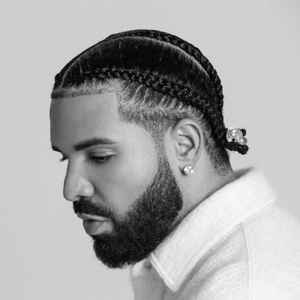 Real Name:
Aubrey Drake Graham
Profile:
Born October 24, 1986 in Toronto, Ontario, Drake is a Canadian actor and recording artist, and one of the co-founder of the OVO Sound label.

He originally became known for playing the character Jimmy Brooks on the TV series Degrassi: The Next Generation. As a rapper, he performs under the mononym Drake. Early in his career, Drake established a close affiliation with Lil Wayne's Young Money Entertainment before officially signing with the record label in June 2009.

Drake is the son of Dennis Graham, a drummer who worked with Jerry Lee Lewis; and the nephew of musicians Larry Graham and Mabon "Teenie" Hodges. His father is African American (a native of Memphis, Tennessee) and his mother, an educator, is a white Jewish Canadian. His parents divorced when he was five, and he was raised by his mother in Toronto's wealthy Forest Hill neighbourhood, attending elementary school at Forest Hill Public School, and high school at Forest Hill Collegiate Institute, where he began acting, but did not graduate. He also spent many summers with his father in Memphis, Tennessee.
Sites:
MySpace, Facebook, whatgear.com, Twitter, Wikipedia
Aliases:
Aubrey Graham, Champagne Papi, Drakkardnoir, Drizzy
Variations:
Viewing All | Drake
Drake K, ドレイク

January 11, 2018
surprised there's not many comments on Drake. Might as well spill my opinion.

So Drake, I laid him off for years and years, thought he was a complete joke. I listened to some of his hits, actually thought Hotline Bling was awesome but it was way too overplayed to enjoy it. I heard Take Care and only liked The Weeknd songs on it. that might be slightly biased since I am a huge weeknd fan but I really could bump those four songs only.

flash forward to now, I might even be considered a fan. his albums are excellent and it's really cool to hear his journey throughout them all. I still can't get into Take Care though. can still only bump Abel's tracks. Views as well is a flawed album imo. but NWTS and IYRTITL has some of the smoothest production and mixing work I have ever heard. I really enjoy that Drake works with everyone directly for his music too. he has a team of very talented artists.

so yeah I peaked his albums and features and really gave him a chance and really really liked what I heard. More Life was very typical Drake lyrically and the production, though good, wasn't at all innovative. was nice to hear Ye on Glow though. Drake is a good ass artist and is overrated at times but honestly deserves his big fan base and his frequent chart dominance
Reply  See 1 reply Notify me 9 Helpful

October 30, 2013
Drake has taken the rap world by storm, and this storm doesn't seem like it's ending soon which is a great thing. W needed change we needed more diversity. Yes he looks educated yes he looks pretty yes he sings for the ladies and yes it's all true. Their is room for rappers like him in hip hop. Isn't hi hop's goal to evolve because it is the peoples music and people should evolve. Drake is Drake and he is one of the realest out there, he's got heart and guts be him and not someone else. Lets see what he does for 2014 !
Reply  See 1 reply Notify me 4 Helpful

gig list 🎫 by brutallust
Artists performing under a pseudonym, stage name or nickname (a name other than their real or birth name) by Sacstracks
List of Canadian Musicians by Popularity by Eljoexmusic
künstler by EM4Ever
Canadian Hip-Hop Index by subzzee
Tu Cara Me Suena 6 [2017] España. by AaromGustinmondir
Favorite Artists by saykoden
Favorite Artists by atomicpowur
Fall 2015 : My Top 20 Artists by stlpunk
Best by mybeatmakers
Hip Hop by RevConrad
2011 - Best albums by modwonka
BET's - Top 10 Rappers Of The 21st Century by sound.and.vision
View More Lists →