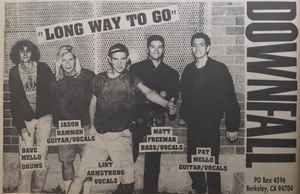 Profile:
Downfall was a ska and punk band from the Bay Area formed by Tim Armstrong, Matt Freeman (2), Dave Mello, Pat Mello, and Jason Hammon following the break-up of Operation Ivy in 1989 and pre-dating Armstrong's and Freeman's wider recognition in Rancid. They performed at least seven shows over a period of three months; playing at Robert Eggplant's house, the Dementia Hauz, Berkeley Square, and 924 Gilman Street.

Downfall's debut album, Get Ready For Action, was originally going to be released on Very Small Records in 1989 before being postponed. In 1994, Tim and Matt were planning to release it as a 10" on Zafio records and as CD and cassette on Lookout, with Tim going so far as to re-record alternate vocals for lines that he had since re-used in Rancid songs. However, Tim found himself too busy with Rancid and could no longer spend any more time working on the Downfall release.
Members:
Dave Mello, Jason Hammon, Matt Freeman (2), Pat Mello, Tim Armstrong

June 13, 2017
Any news on the "ready for action" cd would be appreciated. Realy the only album I don't have that I would die for.

May 21, 2013
Does anyone here know how to get a copy of the "Get Ready For Action" masters ? I am not talking about the crappy mp3s, I mean the real stuff ! This was remixed by Brett Guerewitz for Epitaph but never released.

Musically-technically better than Operation Ivy, but still this type of ska-punk.