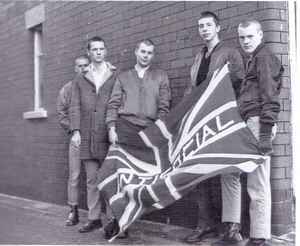 Profile:
Blackpool Punk / Oi! band, formed in 1981 under the name of Hate Of The City (after the Cockney Rejects track) and at first contained six members. A name change to Antisocial and the shedding of two members saw the band revert to a line up of Daz (bass), Spig (drums), Woz (guitar) and Sid (vocals). With this line up they recorded their "New Punks" demo and the "Made In England" EP.
For their next release, "Too Many People" / "Let's Have Some Fun", they were billed as Antisocial With Another Punk?, the Punk in question being The Fits vocalist Mick Crudge though the two tracks recorded were never intended to be released. Following this ex-One Way System roadie Phil took over the vocalist's role from Sid and he debuted on the classic "Official Hooligan" EP. However this turned out to be the band's last release as due to a lack of gigs, lack of press and a general decline in the Oi! scene, they split in mid 1983.
Members:
Daz (23), Mick Crudge, Phil (114), Sid (36), Spig (3), Woz (4)
Variations:
Viewing All | Antisocial (3)
Anti Social, Anti-Social