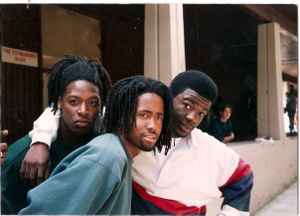 Profile:
Mixed Practice consisted of 3 members, Eclipse (later known as 427), Prop and Flex. Prop and Eclipse were two smooth cats from East Palo Alto by way of Hayward and Union City, respectively. Flex was a transplant from Brooklyn, bringing that timbs-n-hoodie style to the table, crafting a west-meets-east flavor that the Bay seemed to really embrace. Eclipse (Walt) did all the production (ASR10, natch). They recorded and performed on the Bay Area underground circuit from around 1993 – 1996, and then broke up. They recorded "The Homegrown EP" tape in 1995, and had some 4-track material circulating prior to that. Originally the group had one other member who left the group early on called Stiz. After the group broke up Prop and Eclipse both went into the music industry, the latter taking up management of Planet Asia and Jake One among others and the former focusing on local party promotions.
Members:
Flex (25), Prop (2), Stiz, Walter Taylor
Variations:
Viewing All | Mixed Practice
Mixedpractice, Mpx