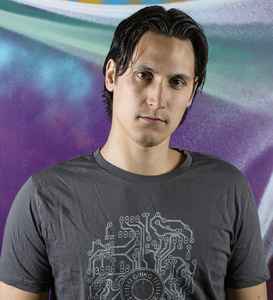 Real Name:
Conrad Hoyer
Profile:
Conrad Hoyer started developing his producer skills when he was just 13 years old (1993). At the age of 16 he was the youngest artist signed by DJ Ruffneck on his labels Gangsta Audiovisuals and Supreme Intelligence. He released under various names, but the big success had not come yet. Dj Ruffneck urged him to develop himself as an artist to prepare him for the big music bizz. So he enrolled at HKU Music Technology in Utrecht.

In 2001 Conrad signed a new contract at Enzyme Records, after Ruffneck wanted to go in a new direction musicwise and killed off the previous labels. This is where he created the Blackbox release as part of the Enzyme X label (also as cd release on Enzyme Records) which got great response in the underground scene. It was not until 2004 when Butterfly VIP hit the stores when his big breakthrough came to be. Recognised at big parties like Masters of Hardcore and Thunderdome. From this day on Ophidian became a name to be reckoned with. By combining the hard and raw with beautiful melody lines, he has had a huge influence on the hardcore scene of today.

In summer 2005, Ophidian founded the label Meta4, in collaboration with DJ Ruffneck and Cardiac Music BV. Since 2008 he manages it independently.

In 2019 Ophidian explained on Facebook that he left Enzyme Records, and will release his music as a free agent, for the time being. Shortly after, his release on Heresy was released, which will be followed by a release on PRSPCT (as Meander).
Sites:
cardiac.nl, Facebook, ophidian.dj, MySpace, SoundCloud
Aliases:
Conrad Hoyer, Cubist Boy, Meander, Source Unknown (2), Trypticon
Variations:
Viewing All | Ophidian
Coone, Ohidian, Ophidian As Raziel, Ophidian as Raziel, Ophidiom

Ophidian is truly a master. His productions are top: interesting, addictive, intelligent hardcore as well as lots of experimental music. But he doesn't limit himself to only one area of electronic music which can clearly be seen on his current releases. By producing quality hardtechno on the protocast label he'll be a recognized name in the techno scene very soon for sure.

If you like hard stuff, do yourself a favour and give it a listen - you won't regret it.

Conrad Hoyer is in no uncertain terms a genius. He can make thunderous distorted techno to melodic party gabber to thoughtful beatless pieces without anything sounding lazy or contrived. He can throw in a uplifting piano section (a piano for crying out loud!) into a track like 'Butterfly' or Angel without it coming across as cheesy. He can combine subtlety with stonking great kick drums which pick you up by the lapels and throw you around the room

But despite all the musicality and high concepts of his release, there none of the po-faced chin-stroking pretentiousness that infect most techno producers. I saw him DJ at a club in Scotland where he finished a set of Enzyme/Gangsta/Supreme Intelligence/Ruffneck tracks by playing 'Jiieehaa' by Diss Reaction, at which point he jumped off the decks and came to have a dance with the punters.

Everyone with the most passing interest in hardcore or gabber should feel grateful and humble for the music Ophidian makes.