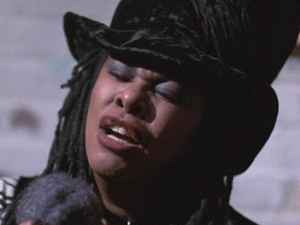 Real Name:
Diane Luckey
Profile:
Mysterious singer who is most well-known for the song "Goodbye Horses," featured first in the 1988 film Married To The Mob and then again (and most famously) in the 1991 film The Silence Of The Lambs, both directed by Jonathan Demme.

Lazzarus worked as a taxi driver in New York City before being discovered as a singer. She has also contributed music to other Jonathan Demme movies Philadelphia (performing a soul version of Heaven by Talking Heads) and Something Wild. To this day, not much is known about her or her backing band, but "Goodbye Horses" has become a sort of cult classic.

Finally breaking her silence in 2018, Luckey has stated that she has no interests of returning to the music industry, and is happy to live a private life as a bus driver in Staten Island, NY. She appreciates the support of her fans over the decades, but will no longer make any further public statements or appearances.

November 28, 2020
I saw Q Lazzarus at the Borderline, London in 1990 (supporting King Swamp) and was so impressed that I went out the next day to buy their stuff - of course nothing available. Then about a year later the single appears, and nothing more - such a shame as there was so much energy in that performance.