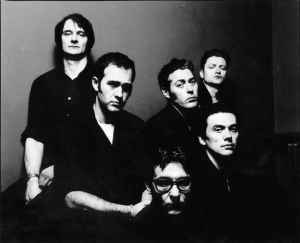 After a hiatus between 2004 and 2008, the band's line-up was reduced down to Staples, Boulter and Fraser, with a rhythm section of Earl Harvin (drums) and Dan McKinna (bass) (and intermittent appearances by Thomas Belhom and David Kitt). Their second act now eclipses their first line-up in terms of volume of output (if not commercial success).

Tindersticks were one of the most original and distinctive British acts of the '90s, standing apart from both the British indie scene and the rash of Brit-pop guitar combos that dominated the U.K. charts. Where their contemporaries were often direct and to the point, Tindersticks were obtuse and leisurely, crafting dense, difficult songs layered with literary lyrics, intertwining melodies, mumbling vocals, and gently melancholy orchestrations.

At the start of their career, the group filtered the dark romanticism of Leonard Cohen, Ian Curtis, and Scott Walker through the bizarre pop songcraft of Lee Hazlewood and the aesthetics of indie rock. Later recordings have been marked by the influence of soul music, and their excursions into instrumental soundtrack work (primarily working for director Claire Denis). Though their music was far from casual listening, Tindersticks gained a dedicated cult following in the mid-'90s, beginning with their eponymous 1993 debut album, and continue to release music to a dedicated fanbase.
Sites:
tindersticks.co.uk, instagram.com, Bandcamp, Twitter, Facebook, YouTube, Wikipedia, elsantuariodelosburros.com
Members:
Al Macaulay, Dan McKinna, David Boulter, David Kitt, Dickon Hinchliffe, Earl Harvin, Mark Colwill, Neil Fraser (2), Stuart A. Staples, Thomas Belhom
Variations:
Viewing All | Tindersticks
The Tindersticks, Tinderstick

Deep, dark blistering band that has done some breathtaking albums.
Stuart Staples voice is like no other. His dark soaring vocals and the bands dead heavy orchestrated arrangements are something any fan of Walkabouts, Nick Cave or Midnight Choir should embrace.
This is England's best kept secret and should not be missed, and their three first albums are classics and completely essential.
Put on any album of this fantastic band and you need a bottle of cognac right away.