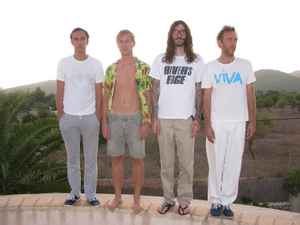 Die Verboten was originally announced in late 2006 in Belgian weekly magazine HUMO. Die Verboten debuted officially in June 2009 with 'Live In Eivissa' released on The Vinyl Factory.
Later that year In an interview with Resident Advisor, David and Fergadelic announced the next Die Verboten release. Described by David as a DVD (DieVerbotenDisc), it was planned to include two albums worth of material, covering everything they recorded at the time. David:"You can expect the next release to be a DVD (DieVerbotenDisc) which will include everything we have recorded until now - two albums worth of material". This release, originally aimed to be released in 2009 on Vinyl Factory, never released. Die Verboten later surfaced in November 2015 on Deewee with '2007', featuring unreleased recordings originating from 2007.
Members:
David Dewaele, Fergus Purcell, Henry Smithson, Stephen Dewaele