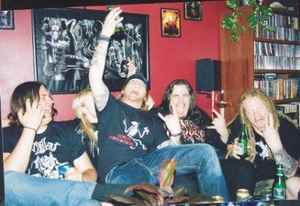 Profile:
The band was formed back in 2001 and already released a split 7"EP, a demo and planned to release the recording "Death Shall Set Us Free" as their debut CD on some label, but as they got problems with the record-company they decided to make it available as free download on their homepage. Their last release is this 7"EP called "Black God Rising" offering Death Metal mixing American Death Metal with the good old Swedish one.
Sites:
MySpace
Members:
David Andersson, Jimmy Johansson, Jonas Albrektsson, Mattias Frisk, Robert Kardell, Tomby Zombie