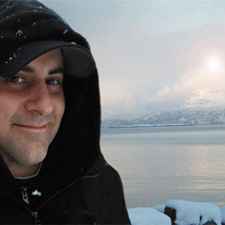 Real Name:
JimDe
Profile:
Boreal Taiga started as an experiment in the ambient / downtempo realm around the year 1998. Founded by Linc Belt industrial enthusiast, Jimde, it progressed further then imagined. From the hills of Los Angeles county, Jimde moved to Seattle Washington after having first fallen in love with the Pacific Northwest in 1994. Thus obtaining his goal and desire to be closer to Alaska and the arctic north. Traveling to Alaska many times, exploring the wilderness and far reaches of the cold north, even venturing inside the deep arctic circle, Jimde decided to showcase his music by the many influences of the deep Northwestern forests, Alaskan bush and Canadian North. His love for all things natural and icey, Jimde brought Boreal Taiga to life.

Boreal Taiga has found it's roots and now has a history to be included in many live outdoor festivals across the USA and now aiming for Europe's electronic festivals, we can see a rise in Boreal Taiga's goals. With more studio albums in the making, you can get a glimpse of the music created at Boreal Taiga's website.

Boreal forests named for the North American northern forests, as well, Taiga forest, named for the Russian northern forests, was chosen as an appropriate name for Jimde's plan to bring his music to a wider audience. Since Boreal Taiga was started, the music has grown and rightly so. Incredible soundscapes that instill visions of arctic snow, tundra and Boreal/Taiga forest systems which incidentally, are in grave danger of becoming dried up wastelands due to many reasons, including man's disregard to natural surroundings. Boreal Taiga's music envelopes the senses with subliminal frequencies and soothing melodies coupled with downtempo/trip hop beats and sometimes the lack of beats or drums to create amazing ambient soundscapes and downtempo creations.

With 5 full length albums such as the self titled "Boreal Taiga" release with an incredible live version of June 24th, 1947, Qoldai'yek after the famous Shaman from Alaska's Shaman Island and the latest release, Northern Shamans, Boreal Taiga aims to continue as Jimde has made it to Europe's North Arctic Norwegian environments. Closer to the Taiga forests, it is time for more explorations and an even wider audience.
Sites:
borealtaiga.com, SoundCloud, MySpace, YouTube, Twitter, Facebook
Aliases:
BT Gate X-138, James De-Pasquale, JimDe