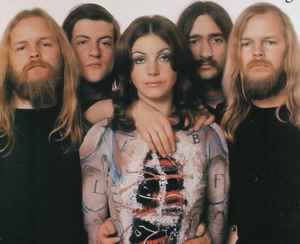 Profile:
Pop band from Voorschoten / Voorburg, Netherland.
This Dutch band featured female vocalist Jerney Kaagman, twin brothers Chris and Gerard Koerts (Chris handled the guitars and Gerard handled the keyboards), bassist Hans Ziech, and drummer Ton v.d. Kleij. Earth & Fire had quite a few hits, like "Seasons" (1969), "Ruby is the One" (1970), "Wild & Exciting" (1970), "Invitation" (1971, released only as a single at that time), "Memories" (1972), and many more. In fact, Song of the Marching Children had a Dutch hit aswell, "Storm & Thunder" (but was edited for single release). When this album came out, the band started to include the Mellotron and synthesizers to their keyboard setup (as well as the Hammond organ, which they used from the beginning), as well as including a side length epic.
Earth & Fire were able to make some great albums in the process. The early Atlantis (1973) and Song of the Marching Children (1971), are recommended. To the World of the Future (1975) finds the band exploring more synthesizers, and Disco tendencies were starting to surface. Other albums are Gate to Infinity (1977), Reality Fills Fantasy (1979), Andromeda Girl (1981), In State of Flux (1982), and their 1989 reunion album Phoenix.
Sites:
earthandfire.nl, Wikipedia, Wikipedia, imdb.com
Members:
Ab Tamboer, Age Kat, Bert Ruiter, Cees Kalis, Chris Koerts, Gerard Koerts, Hans Ziech, Jerney Kaagman, Jons Pistoor, Lysett, Mark Stoop, Ronnie Meyjes, Theo Hurts, Ton Scherpenzeel, Ton van der Kleij
Variations:
Viewing All | Earth And Fire
Earth & Fire, Earth&Fire, アース & ファイアー, アース・アンド・ファイアー

June 26, 2022
Like Jefferson Airplane became the awful Starship, Earth & Fire did become straight-out pop later, but they didn't change their name and were not awful, just different. "Weekend" is a remarkable song with some nice odd-length phrases. Lead singer/frontperson Jerney Kaagman was very pretty (she was in the first issue of Dutch Playboy) and could really sing - but not dance! There is a video of "Weekend" with her gyrating in front of the band, all of whom are wearing outfits that make ABBA seem conservative! I recommend the song, but the video will scare you away from the group! Listen, don't watch!

September 26, 2019
Occulted , derivitave , confused and rather boring Dutch pop group that no one remembers.
See 6 replies

Their first two albums are outstanding. I'm not even a fan of Prog but Earth & Fire managed to balance it with some seriously heavy riffs and pure pop song structures.

Yeah, that sounds weird on paper but it just works!

Early songs such as Seasons & Hazy Paradise still have a distinct Psych touch, which is wonderful.

But by '71 they were getting seriously heavy. The b-side "Lost Forever" is good enough to rival Zeppelin of the same era.

While their debut LP contained definite hints of Prog ("21st Century Show" being a prime example), it was only with "Song Of The Marching Children" that the band fully embraced it.

The a-side of the album contains four songs, quite varied in style. "Ebb Tide" is light but carries a menacing undercurrent. "Storm And Thunder", one of my personal favourites, is a full-on ride through hell to heaven and back again.

The b-side contains one song (the title piece). It was actually previously recorded as a short 4 minute piece (it featured as a b-side in fact). Here the song is fleshed out to a full 18 minutes. It's the perfect example of Earth & Fire. The musicianship is top drawer, Jerney's vocals are mind blowing, the song never gets boring. It's so varied, but never too "out there" (which is something I dislike in Prog, over-indulgence).

I kinda stumbled upon this band quite by chance. I just found one of their compilations in a record store and thought the band looked cool so I gave it a listen. I was hooked, and I'm more into Electronic music!

In fact, some of the songs do remind me of one of my favourite bands ever, Ladytron (for example, the single "Memories"). No, it's not just the female vocals. Much more than that. I feel a very strong musical correlation.

Anyway, I have yet to really investigate the rest of Earth & Fire's discography. I'm a little wary with what I've heard so far (from the late 70's) to be honest. But I'll definitely be checking out Atlantis, their 3rd LP.

November 29, 2017
The band should have stopped after releasing the first album and maybe the single Memories.
See 3 replies

This must be a mistake. I have never read that the band was named 'Earth & Wind' of 'Earth'