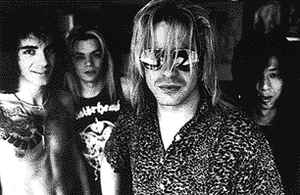 The bass player who appeared on the album 'Generation 3' left the band prior to its release, and was replaced by Jeff Pepsii. The band then toured around Europe to promote the album.

Geoff Starr (singer) passed away a few years after this release.

Jet (guitar) became a member of The Parkinsons and UK Subs.