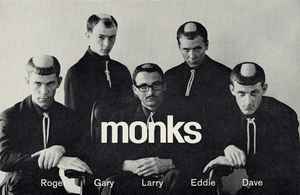 Real Name:
Monks
Profile:
Monks are a garage rock band, formed by American GIs, based in Germany in the mid to late 1960s. They reunited in 1999.

March 26, 2019
Are there no audio releases of their German TV performances?
See 2 replies

October 12, 2009
I just wanted to add to the recent review that the whole monk image was created by the two german artists/designers Walther Niemann and Karl-H. Remy, who also became the managers of The Monks. If you want to know more about the exceptional story of The Monks, watch the excellent documentary "Monks - The Transatlantic Feedback" which features a lot of interviews with all original members of the band and original footage from the 60ies.

January 30, 2008
Firstly I cannot believe that no one has reviewed this group yet. Like the Sex Pistols, these artists only ever recorded one "proper" album. They formed sometime in the early 1960's as The Torquays by 5 American G.I's based in Germany. However the real fun didn't start until the changed their name to The Monks. Not only did they change their name but they also changed their appearence & most importantly, their sound.
Now wearing monk's "habits" (Religious clothes) & shaving a bald spot into their heads (Like monks!) they adapted their sound accordingly. Gone were the "teenage" rock & roll "beat pop" sounds & in came the super heavy, stripped down, twisted rhythm & blues & a banjo!
Honing their sound through endless gigs around places like the red light district of Hamburg (Along with The Beatles.) they built a fearsome reputation for their "evil" sound & bizzare onstage persona. Sometime in early 1966 they took this experience & recorded their first & only album, the seminal Black Monk Time.
Saying Black Monk Time was out of odds with the rest of popular music is such an understatement. With songs like "I hate you" & "shut up" they didn't fit into any scene that was around at the time. This is ten years before "punk" exploded onto the international headlines & 3 years before even groups like Iggy & The Stooges or Rocket From The Tombs even formed! How & why they came up with this music & image is not easily explained, but may have something to do with the Vietnam War (Check the intro Monk Time) However while everyone else was tuning in & dropping out on lsd or pot The Monks were fired up & pissed off on Amphetemine Sulphate (Speed.)
As for the music itself it has been described as Psychedelic or Garage. I myself would say punk, pure & simple. You can hear the whole future of rock music here, from Joy Division basslines,punk nihilism, shouty vocals, repeated loops of music like Krautrock, fearsome tribal drumming & oh yeh-a banjo! Hendrix loved them, Ray Davies (Kinks) hated them but remember though NO-ONE had ever dressed like them or made such a sound.
Quite honestly this is one of the greatest & strangest groups of all time.