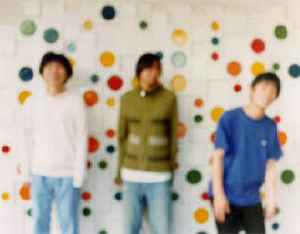 Profile:
Computer Soup (often stylized as Coms) was a Japanese abstract jazz / experimental / glitchtronica music group, established in 1993 by five musicians from Tokyo. They started as a more or less traditional acoustic jazz outfit, mostly performing on the streets of Aoyama, Shibuya and other Tokyo neighborhoods, but in the subsequent years Computer Soup began combining Satoru Hori's trumpet and other instruments with various electronic devices, oscillators, audio software and toys to create a distinctive blend of cosmic jazz, incorporating elements of improvisation, minimalism, unusual time scales and tones, etc.

In 1997, Computer Soup released their debut eponymous album on Soup-Disk's sub-label Silverworld. The album included a selection of tracks recorded during improvisational sessions in the studio, with electronics, prepared piano, trumpet, didgeridoo, percussion. Only distributed in Japan, the CD was nevertheless recognized by the international audience, with a favorable review by Paul Schütze published in the Wire Magazine. It was also praised by Markus Popp of Oval, who played live with Computer Soup during his visit to Japan in November 1998.

Their second album, Toizarasi, was released via Soup-Disk's sub-label Sun Out Recordings in 1999. This work combined elements of ambient, fusion electronica, post jazz, and electroacoustic free improvisation. The opening track soft binilu illustrated a new direction towards glitch / granular synthesis / microtonal music. Toizarasi was again recognized and praised overseas by Oval, Andrew Pekler (Sad Rockets), Stefan Betke (Pole) and other musicians and publishers. Two tracks from the album were released in the United States on 10" split-single with Chessie by Plug Research. Computer Soup also contributed a track for Nowhere Rain compilation on a prominent Lastrum label in Japan.

In 2000, Computer Soup released a CD-R trilogy Urumuchistan / Girl From Urumuchi / Urumuchi In The Sky via 360° Records, as well as a live session recorded at Nude Lounge (Nomad Vol.1), and a collaboration with BusRatch. Their next ‘major’ album Dream Mons on Lastrum's sub-label Ze-Koo was produced as a multimedia collaboration on the subject of dream and sleep, combining Keiji Yamabe's artwork, eight ambient compositions by Computer Soup, and accompanying short stories for each track, written especially for this project by Yamatsuka Eye (Boredoms), Takehisa Kosugi, illustrator Shinro Ohtake, Butoh dancer and performer Akaji Maro, photographer / writer Kyoichi Tsuzuki, and other Japanese artists.

The ensemble continued performing as a trio, with Satoru Hori on trumpet, Kei Ikeda on computer, and Osamu Okubo on various toys and electronics. In 2001, Jan Jelinek played his first concert in Japan, organized at Tokyo club Yellow as a part of ~scape label tour. Computer Soup performed as the support act that night, and Jelinek was very impressed by their free improvisation on portable electronic toys, oscillators and trumpet. He offered the band to play together once more a few days later, and on September 26 they recorded a 3hr improvisation in Computer Soup's living room. In the following months, they separately picked best parts from the session, which were slightly edited and assembled into Improvisations And Edits Tokyo, 09/26/2001 album. Perhaps the best-known and most popular album by Computer Soup, this CD was released by Soup-Disk in Japan and licensed to Quatermass/Sub Rosa in Belgium, where it was released as a part of Audiosphere series. In May 2018, Jan Jelinek is re-releasing this album on LP via Faitiche label.