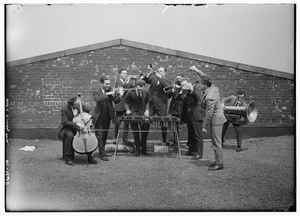 Profile:
The International Novelty Quartet and The International Novelty Orchestra started appearing in record catalogues from 1922 to the 1930's, becoming extremely popular with a string of best-selling discs. No one seems to have seriously studied the different groups that were formed solely as studio units to make records, always with the xylophone and clever arrangements as a special feature. They brought together some of the best musicians in England and the United States. Information on the participants is scant. These 'house bands' released discs in Europe under the these names also.

In the United States, The International Novelty Orchestra was a pseudonym for the Victor house band conducted by Victor's musical director Nathaniel Shilkret in the Victor studios. The pseudonym was first used in March 1922. Brian Rust published the session data for US recordings in his 'American Dance Band Discography'. Between 1922 and 1927, a total of 135 tracks were recorded; 36 of these were rejected and 99 were released on Victor in the USA. Seventeen different vocalists were used but many tracks had no vocals.

English domestic studio recordings of the same variety of music as that released in the USA also employed the names The International Novelty Quartet and The International Novelty Orchestra. The titles recorded in England seemed to be of 'foreign' material, thus giving the 'international' look. Based on unpublished data from Brian Rust's journals, some early sessions (1929-1930) [e.g., Zon T-5489 The Dickey Bird Hop] were recorded by The Bert and John Firman Orchestra. The 'Choristers Waltz', recorded on 27 January 1930, featured Sylvester Ahola (trumpet), clarinet, alto sax, Bert Read (piano), Rudy Starita (drums-vibraphone-xylophone) and was directed by John Firman. George Scott Wood directed many later recordings. Both Rudy Starita and Harry Robbins seem likely xylophonists. George Scott Wood probably played piano and/or accordion on the discs that he directed. Harry Leader may have been involved in the mid-1930s. Few vocalists have been identified, except for two tracks sung by Sam Browne on Regal Zonophone in 1932 and another two with Ronnie Hill in 1937.