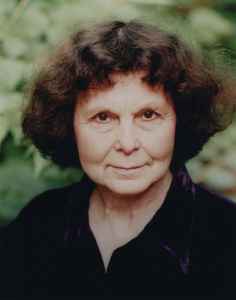 Profile:
Sofia Gubaidulina was born in Chistopol in the Tatar Republic of the Soviet Union in October 24, 1931. After instruction in piano and composition at the Kazan Conservatory, she studied composition with Nikolai Peiko at the Moscow Conservatory, pursuing graduate studies there under Vissarion Shebalin. Until 1992, she lived in Moscow. Since then, she has made her primary residence in Germany, outside Hamburg. Gubaidulina's compositional interests have been stimulated by the tactile exploration and improvisation with rare Russian, Caucasian, and Asian folk and ritual instruments collected by the "Astreia" ensemble, of which she was a co-founder, by the rapid absorption and personalization of contemporary Western musical techniques (a characteristic, too, of other Soviet composers of the post-Stalin generation including Edison Denisov and Alfred Schnittke ), and by a deep-rooted belief in the mystical properties of music. Her uncompromising dedication to a singular vision did not endear her to the Soviet musical establishment, but her music was championed in Russia by a number of devoted performers including Vladimir Tonkha, Friedrich Lips, Mark Pekarsky, and Valery Popov. The determined advocacy of Gidon Kremer, dedicatee of Gubaidulina's masterly violin concerto, Offertorium , helped bring the composer to international attention in the early 1980s. Gubaidulina is the author of symphonic and choral works, two cello concerti, a viola concerto, four string quartets, a string trio, works for percussion ensemble, and many works for nonstandard instruments and distinctive combinations of instruments. Her scores frequently explore unconventional techniques of sound production.
Sites:
Wikipedia, bach-cantatas.com
Variations:
Viewing All | Sofia Gubaidulina
Goebaidulina, Goubaidoulina, Goubaïdoulina, Gubaidulina, R. Goubaïdouline, S. Gubaidulina, S. Gubaydulina, Sofia Goebaidoelina, Sofia Goebaidulina, Sofia Goubaidoulina, Sofia Goubaïdoulina, Sofia Gubaidúlina, Sofia Gubajdulina, Sofia Gubaydulina, Sofia Gubaïdulina, Sofiya Gubaidulina, Sofiya Gubaydulina, Sofja Gubaidulina, С. Губайдулина, София Губайдулина, Софья Губайдулина